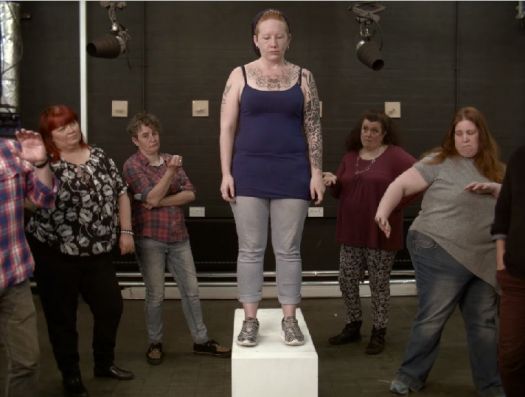 A scene from Wonderland: the art of becoming human

A MANCHESTER School of Art filmmaker has been handed a prestigious Research in Film award.

Dr Amanda Ravetz was one of five winners at The Arts and Humanities Research Council’s (AHRC) Research in Film awards ceremony, held at the British Academy of Film and Television Arts (BAFTA).

Her film, Wonderland: the art of becoming human, fended off stiff competition to be named the Utopia Award: Imagining Our Futures winner.

Hundreds of films were submitted for the awards this year and the overall winner for each category received £2,000 towards their filmmaking.

Dr Ravetz, Senior Research Fellow at Manchester School of Art, said: “This film was made as part of a research project about the utopianism of recovery. The idea that recovery requires the daily renewal of hope. I do this by documenting artist Cristina Nunez's use of self-portraiture with a group of people in longer term recovery, capturing their ambitions to 'feel and be felt by other feeling people'.”

Made in a documentary style, the film captures the creative process and relationships that play out during the course of the photography project. It uses raw personal testimony from the participants together with footage of them taking their self-portraits or work-shopping as a group. The viewer is exposed to the individual confidence and the mutual bonds that emerge as the project comes to fruition.

The research project was led by Dr Ravetz in partnership with Mark Prest, founding director of PORe (Portraits of Recovery), along with members of GMRF and in2recovery. It was funded by the AHRC through the Connected Communities programme.

Launched in 2015, the Research in Film awards celebrate short films, up to 30 minutes long, that have been made about the arts and humanities and their influence on our lives.

Five films were selected from a shortlist of 25, covering stories from across the world and addressing a wide range of topical subjects, from landscape and environmental change to capital punishment, people trafficking, and poverty.

Jan Dalley, Arts Editor of the Financial Times and Chair of the Judging Panel, said: “Each of the winning films, which tell such amazing stories so well, beautifully illustrate the power of filmmaking as a medium to capture the importance and impact of research.”

Mike Collins, Head of Communications at AHRC, added: “All of the winning filmmakers have taken the craft of making films about research to a new level, with an eye for detail and a passion for storytelling, that they can all be rightly proud of.”

See here for the film's online exhibition or click here to go direct to the film.