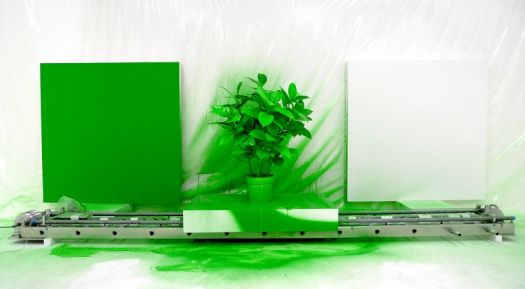 New exhibition explores the hidden work behind the production of art

Re: work at the Holden Gallery from November 5 to December 19

In the production of anything of value – whether it be artworks, objects, even ideas - there is a requirement for work to be done. For the most part though, it is the work element that often remains hidden. In the case of art, the making of work has also been subject to a substantial mythology, often centred around the studio, and the act of creation. What often receives less attention is a focus on the labour that is required to produce any kind of work and the possibility that might be present in the materials that might go to make it. When those materials are taken from everyday life, then this makes the process all the more interesting. The show deals in the notion of transformation, the clever use of disparate things in order to make something new, and to think about something in a different way. With the creative use of materials there is something of a more democratic impulse, the idea of art mattering on a level from the ground up. In this way, the audience have a different kind of investment in both the work and the everyday life out of which it emerges.

The works in this exhibition elevate and celebrate the use of materials and everyday objects; their properties and functions are made visible and integral to the work. Žilvinas Kempinas has relentlessly investigated the material potential of magnetic tape. In a series of installations, Kempinas has incorporated industrial fans and ribbons of magnetic tape to create kinetic sculptures. Utilising the functional properties of the fans, the single strips of tape are activated by the airflow and suspended in the air. The free floating tape appears on the verge of collapsing, twisting and turning, but remain confined by the force of the fans. By combining the two objects and testing their material properties, the work transforms into something more than the sum of its parts, both ethereal and poetic.

Jac Leirner’s works derive from a compulsive need to collect and amass familiar materials and items such as cigarette papers, plastic bags, rulers, and price tags. The objects are products of consumer culture that are used and exchanged so often in our society that they can be overlooked. These items are reignited in rigorous sequential displays in the gallery; the repetitive pattern encourages them to be seen in a different way, embodying them with an aesthetic value that highlights their form, shape, and type. These transformed materials are read and appreciated in different ways depending on the viewer’s background or personal history. A smoker’s relationship with cigarette papers, and a technician’s use of tools, for example; the works unlock a personal value and assert meaning.

John Wood and Paul Harrison are an artist duo who create video works that document their performative investigations, usually from the confines of their studio space. Each film documents an experiment, which is actioned methodically, and tests their own physical limitations in relation to the architectural space they are in. Additional objects such as spray guns, office chairs and built geometric objects enable the performers to interact and react to. The studio space is constructed and transformed for each work, to achieve the optimal environment for the task. Each space is presented in a clinical white space, mirroring an aesthetic that resembles the initial drawing or diagram outlining the activity.