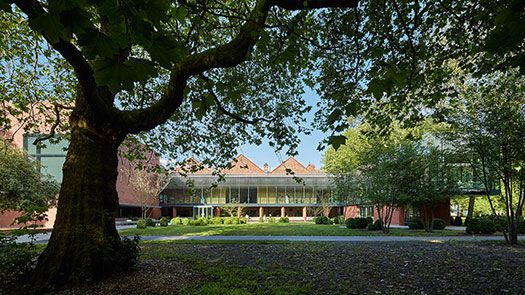 Tuesday Talks - a collaboration between Manchester Metropolitan University and The Whitworth – return this October and November, presenting some of the leading artistic voices from across the UK and Europe.

Starting on October 15th, the weekly talks will include visits from art historians, research fellows, professors and practising artists, all with the aim of exploring the driving forces and influences within contemporary art. All talks take place at the Whitworth from 11:00am - 12:30pm and are free to attend:

Ed Krčma is an art historian specialising in European and North American Art after 1945. He has written catalogue essays for, among others, the Irish Museum of Modern Art, Tate Modern, Matt’s Gallery, and Talbot Rice Gallery, co-founded the contemporary art magazine, Enclave Review, and has curated several exhibitions of contemporary art. His first monograph Rauschenberg/Dante: Drawing a Modern Inferno, published by Yale University Press in 2017, sets out new perspectives on the early work of the great American artist Robert Rauschenberg, its relationship to the 1950's social and political life in the US, and the climate of the New York art scene at the time. This ground-breaking book is a culmination of years of meticulous research as much as it is a product of Krčma’s broader interest in the problems of artistic autonomy, the history and theory of drawing, the relationship between image and text, and between art and thinking. He is currently working on a book project on contemporary art in Britain with a focus on artworks and artistic strategies that achieve density and compactness of meaning through the use of modest materials and spare and concentrated means.

John Plowman is an artist, curator and the co-founder with Nicola Streeten of Beacon project in rural Lincolnshire, an initiative that reflects his interest in articulating the relationship between the production of art and the site of its production and exhibition. It offers opportunities to experience contemporary visual art in non-gallery settings, has so far commissioned context-specific artworks from over seventy artists and has hosted numerous artistic residencies. The questions of the place where the work is made - the studio - and space where it is shown also dominate Plowman's selection of works as a guest curator of the current exhibition at Castlefield Gallery, No Particular Place to Go? (until 27 October). The exhibition provides a temporary "home" for a gathering of historical and recent small-scale works by a number of sculptors associated with the gallery over the past 35 years, including Anthony Caro and Henry Moore, while it also celebrates the continued validity of the autonomous object.

A graduate of MA Visual Culture at Manchester Metropolitan University and a former Research Fellow at the Laing Art Gallery in Newcastle, Sophia Hao is Principal Curator of Exhibitions at the Cooper Gallery, Dundee. Her curatorial interests in artist's collaboration as an "event" and in examining the ideas of public participation, context and process are reflected in her new publication Of Other Spaces: Where Does Gesture Become Events?, published by Sternberg Press earlier this year. The book, edited by Hao with contributions by over twenty prominent UK women artists and writers (Susan Hiller, Mary Kelly, Linder, Laura Mulvey, Monica Ross among others), is a development from a two-part exhibition programme of art informed by feminism staged at Cooper Gallery in 2017/18. It documents the thinking and experimentation of women artists’ collectives in the 1970s and 1980s, their spirit of resistance, collectivity, and self-organization, and traces a history of ideas and alternatives that remain timely and influential today.

5 November – details to be confirmed shortly

Carola Dertnig is an artist and Professor for Performative Art at the University of Fine Arts in Vienna. Her drawings, video works, installations and her live work demonstrate an explicit interest in feminist perspectives, the politics of gender, and more generally the processes through which roles are formed and articulated in language, images and gestures. In Dégueulasse, her performance first presented in 2010, Dertnig attempts both to decode and overwrite aspects of the history and ethos of performance art through a precisely timed and staged collage of quotes by John Cage, the choreographer Simone Forti, Jean-Luc Godard's film À bout de souffle, and Yvonne Rainer’s dance sequences. Presented alternately as instructions and questions, the quotations and paraphrases generate a new sense of engagement with the historical material in which roles and attitudes are not pre-determined but arise form the context, action and participation.

Michael Newman is a Professor of Art Writing at Goldsmiths College and an associate professor at the School of Art Institute of Chicago. As both an art historian and a critic he has written extensively on contemporary art, including books on Richard Prince, Jeff Wall, Seth Price, Anthony Gormley and Stuart Brisley, as well as thematic essays on the wound, the horizon, contingency, memory, the trace of drawing and nonsense. He co-edited with Jon Bird Rewriting Conceptual Art (Reaktion Books, 1999) and with James Elkins The State of Art Criticism (Routlege, 2007). The first volume of his selected writings since 1983 ‘I know very well … but all the same’: Essays on Artists of the Still and Moving Image, to be published by Ridinghouse, focuses in particular on the image in its relation to language, the question of how art works manifest themselves and on the traces and archive of the event. It features artists such as Jeff Wall, John Stezaker, Tacita Dean and Steve McQueen among others.