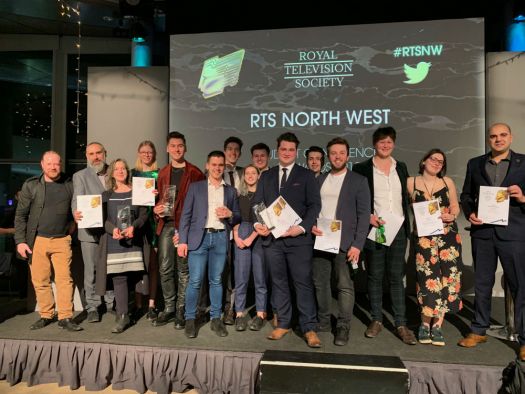 Manchester Metropolitan winners and nominees flanked by their course tutors

Students and alumni with a flair for film picked up prestigious prizes across three categories at the Royal Television Society’s North West Student Awards.

The students and recent graduates from the Manchester School of Art created original and enthralling films and animation, successfully transferring their creative vision onto the big screen.

The awards are testament to the strength of filmmaking, media and animation at the art school – based at Manchester Metropolitan University – which is one of the leading centres in the sector for film production and nurturing talent.

The RTSNW Student Television Awards recognise the best audiovisual work created by students at undergraduate and postgraduate level within the region.

Alumni Dan Thorburn, Dom Old, Maxwell J. Graham, Jonathan Bradshaw and Will Coldwell, who graduated in 2018, were chosen for the cinematography of their film Near Wild Heaven in the Camera category.

Hicks said: “Winning an RTS North West award has been incredible and humbling, and I owe a great deal to the fantastic staff and fellow students. Even through the doubt, colleagues and the faculty always encouraged us to push on. I’ve learned never to fear the risk of failure as it is an opportunity for success.”

Thorburn said: “Winning this award is fantastic. It gives the well-deserved recognition and thanks to both Max and the camera team, who did such an amazing job transposing my vision into the screen. Without Max, we would be nowhere and I am incredibly thankful for his skill and creativity on not just this project but on everything we work on together.”

Programme leaders from the Department of Media were incredibly proud to see their students pick up the prestigious awards in their categories.

Jacqueline Butler, Head of the Department of Media at Manchester School of Art, said: “The outstanding student award winners this year clearly reflect the innovative, imaginative and highly creative approach our students and staff have to screen-based storytelling in the Department and the Faculty of Arts and Humanities.”

“Being recognised by the Royal Television Society for the artistry within our students’ excellent films demonstrates the talent, vision and focus of both the course and our students.”

Marshall praised students Hicks and Watson for their ‘outstanding creative work, dedication and unerring passion for the craft of animation’.

The outstanding student award winners this year clearly reflect the innovative, imaginative and highly creative approach our students and staff have to screen-based storytelling in the Department and the Faculty of Arts and Humanities.

It might not be the last the filmmakers are heard of too: the Near Wild Heaven team recently successfully crowdfunded for the production of a new film, ‘Trucker's Atlas’, which has already won funding from the BFI.

The film is due to star Neil Bell, who recently appeared in Mike Leigh's Peterloo.

Dr Jenny Holt, Programme Leader BA (Hons) Filmmaking in the Department of Media, was ‘immensely proud’ of the filmmaking winners in the Camera and Drama categories.

“The award-winning work in Near Wild Heaven and The Girlfriend Experience is testimony to the original voice, talent, dedication and ambition of our young filmmakers,” she said.

“It’s fantastic that the Royal Television Society has recognised their outstanding work in this way, and we congratulate them all for their deserved achievement.”

Winners were announced at an awards ceremony at the Lowry Theatre in Salford on Tuesday. 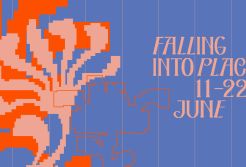 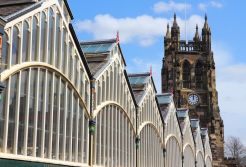