Over 2016, Manchester School of Arts Outreach team have been leading the Peppered Moth Project. Working alongside colleagues in the Faculty of Science and Engineering and partners across Greater Manchester we published a resource book for teachers and educational practitioners all about the Peppered Moths story.

The Peppered Moths story is a Manchester Story. The moth which comes in two distinct shades of black or white has seen its populations in each colour grow and shrink in response to the level of pollution in the city. Imagine yourself back in Victorian Manchester with heavy industry belching soot and covering the streets, and youll see how the black moth became the better at camouflage. Contrast this to modern times where the pollution levels mean our streets are no longer covered in soot, causing the decline of the darker moth. This story of evolution acts as a way of talking about climate change and mans impact on the environment around us.

To create the resource we worked across Arts and Science disciplines from Key Stage 1 to 4 with different schools and young people at events across Manchester. We made giant wicker moths, suspended from the Art School's roof; intricate wire moth animations; caught live moths with primary school children and paraded moth costumes - and much more. As well as the workshops our artist in residence Ant Hamlyn created a body of work in response to the moths story. Ant shared this work as part of the European City of Science Festival in July, and Manchester Design in September.

All of the activity over 2016 is gathered in the teacher resource book Whisper to a Shout which was launched on November 17th 2016. 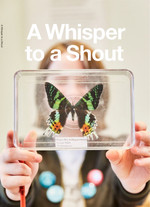 Peppered Moth Publication: A Whisper to a Shout