F for FILE (2005) is an interview with the artist A.A. Bronson. Bronson, along with Jorg Zontal and Felix Partz, co-founded the magazine, FILE in 1972. FILE aimed to give an identity to the dispersed Canadian art scene, but it primarily functioned as a portable gallery-cum-archive for the concepts and actitivies of its media-savvy artist-editors. In the interview with David Brittain, Bronson describes how FILE was shaped by the Canadian underground scene of the late 60s, including the mail art scene, the theories of McLuhan and Burroughs and counter-culture politics. FILE was part of a network of artists' publications that encouraged practices, tastes and attitudes that fell outside the rather restrictive remit of the official art world. 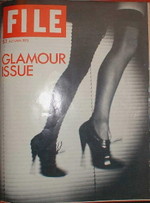