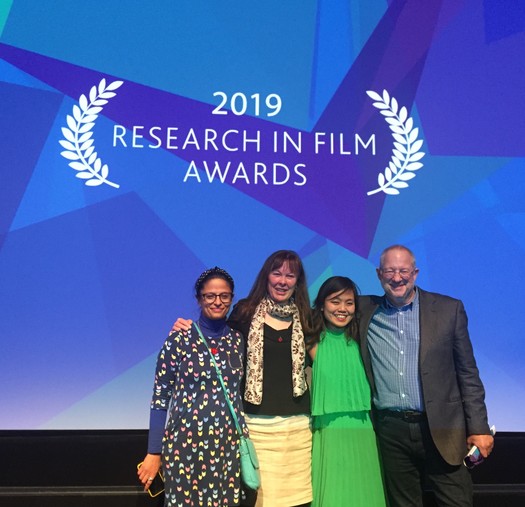 Kai pictured with mentor Professor of Psychiatry Philip Asherson and other colleagues at the British Film Institute, 12 November 2019, for the AHRC Research in Film Awards. Her film poem Wanderings and Meanderings of the Mind and Body was in the awards' Official Selection ahrc.ukri.org/innovation/research-in-film-awards/the-awards/

Available on https://vimeo.com/273138637, the film is of wanderings and meanderings: physical, mental, affective. Flitting in and out of consciousness. Of legible images: travelling through the Canadian Rockies; fingers combing through a tapestry; a woman with a trolley bag wandering around London. Of images that are evocative, abstract, associative and coy: A water symphony? An angry feline desiring touch? Urban decay? Of deaths of cats get reincarnated? Or repetition and renewal? At once visceral and intellectually-intriguing, the film poem bypasses language and draws you in while also denying entry. It draws on themes and materials fromWe sat on a mat and had a chat and made maps! #MagicCarpet.

The work premiered at the South London Gallery on 5 June 2018, and has been shared at the Southbank Centre, Science Museum and NTU Centre for Contemporary Art (Singapore) amongst others. It has been created by artist Kai Syng Tan with her long term collaborators Philip Tan (music) and Michael Tebinka (visual), with additional footage by: Flanders Tapestry, Enamel Hoque, Marco Berardi and Martha McAlpine.