Collaboration is an intrinsic part of Adkins practice and she has worked with artists from a variety of backgrounds including audio artists, classical musicians and composers and professionals within dance, television and theatre.

From 1998 to 2006 Adkins collaborated with the Glasgow based artist Lisa Le Grove under the name Lisalouise. This ongoing collaborative practice was predominately performance based and directly explored collective personal histories as well as referencing the diverse yet shared cultural landscapes of England and Scotland. The appropriation and re-enactment of seminal moments within popular culture was a re occurring theme within the performance works. Synchronised displays were often featured alongside choreographed dance routines and re workings of popular music videos.

As part of this collaborative practice Adkins has exhibited throughout the UK, Europe and America. Previous works include;
Experience the Difference (2005) a Centre of Contemporary Art (CCA) commission. Performed in Gallery 1 of the CCA as part of the exhibition The Magic of Real Life in Real Situation.
Experience the Difference was subsequently performed as part of the show Et Tu Tribute at Edinburgh Collage of Art Sculpture Court curated by the Embassy Gallery in Edinburgh.
Helpmehelpyou (2002  2005) a new work commission for The Arches in Glasgow performed as part of the New Work Festival in 2002. Originally funded by The Arts Council of England, Scottish Arts Council, My Beautiful TV and The Big Idea.
Helpmehelpyou was subsequently exhibited at The Hereford Salon in London, the International3 gallery in Manchester and at The Embassy Gallery in Edinburgh. Additionally Helpmehelpyou has been screened as part of the Corner Houses artists film programme on The Big Screen, Manchester 2002 and in 2004.
Somethin Stupid (2000) a commission for Philadelphia International Festival of Visual and Live Art, Philadelphia, USA. 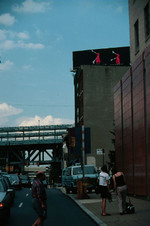 'Experience the Difference' by Lisalouise