Between - Programme of Performance Commissions

The Between project investigates how contemporary performance can challenge the relationship between art and historical representation through re-enactment.
Using the Between curatorial model the research explores the appropriation of historic cultural events extending the work of Deller and Lütticken as a method of understanding performance art practice within the cultural institution.

The research method re-patterns the original Between model (Kunsthalle Dusseldorf 1969  1972) to extend exploration of Performative Curating (Maria Lind). The curatorial agenda was to forefront performance art practice within the cultural institution by utilising the interstitial space of the gallery as a creative lab.

The research method was conducted through a series of individual commissions, as case studies, to explore ways in which contemporary performance art challenges the paradigms between art and historical representation within the gallery space. Adkins commissioned five international artists focusing on the predefined curatorial themes of:
1. Media, and the Aesthetics of Experience, Documentation and Reinterpretation (Trisha Baga USA).
2. Artists as Curators in and of Historical Contexts and Performance (Hayley Newman UK & Annika Strom SWE).
3. The Contemporary Past and Dynamics of the Actual and Possible (Ruth Barker & Louise Adkins UK).

Between received major funding, to the total of £47,619. Funding came from Arts Council of England - Grants for the Arts, The Contemporary Art Society, MIRIAD, International 3 and Cornerhouse. In terms of impact, all three live events were sold out and the Cornerhouse estimated further audience dissemination through broadcast, online and written outputs at 31,000.

Between 1 - Facings by Hayley Newman

Between 1 - Facings by Hayley Newman 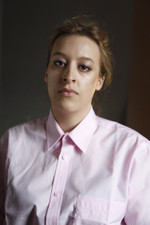 Between 2 - The Inept Five by Annika Strom

Between 2 - The Inept Five by Annika Strom

Between 2 - Material Balance by Louise Adkins