The Rediscovery of Shadow Tissues

This project, supported by the Leverhulme Trust, was completed in 2013 with the publication of a book: The Beauty of Experiment (in two parts): Shadow Tissues at Turnbull & Stockdale by Philip A. Sykas, with a foreword by Paul W. Turnbull. The Rediscovery of Shadow Tissues by Patricia Belford, assisted by Beth Milligan.

In the period between the two world wars, a type of warp-printed furnishing fabric known as shadow tissue enjoyed a great popularity. The Lancashire textile firm, Turnbull & Stockdale, was an eminent producer of the fabric. Its willingness to experiment with mechanised production, new design styles, fancy yarns and weave constructions allowed Turnbulls to develop the fabric further than its competitors. However, the fabric was not revived after the war, and the specialist knowledge entailed in its production was lost. Using the Turnbull Archive, Philip Sykas set out to regain an understanding of shadow tissues from surviving samples and documentary evidence. Parallel with this study, Patricia Belford undertook to test this information in practice, and to continue to develop shadow tissues to make fabrics suited for todays marketplace.

The project demonstrated how historical and practical knowledge support each other in gaining an understanding of the past. It showed that historical textiles are not simply things of beauty that provide inspiration, but repositories of craft knowledge that can put us in touch with the makers of the past.

Sample from appendix on block cutters 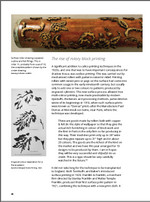 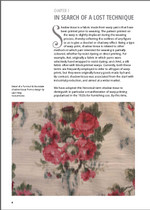 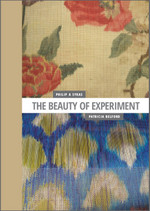