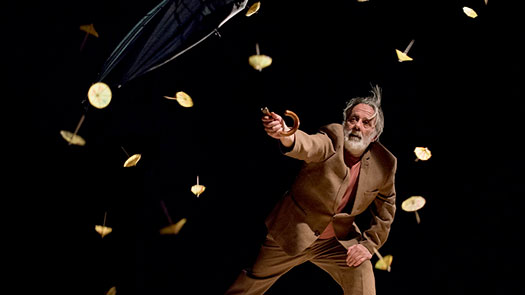 A video recording of this talk will be available from 28 October.

Reckless Sleepers was formed in 1988, taking its name from a painting by the Belgian surrealist Rene Magritte. The company or Project was formed out of a multiplicity of ideas and concerns, mishaps, accidents and opportunities.

There was, I remember, an energy, a reaction to proper theatre in big places, too big for our small little words to get into. I was, I remember, getting angry at watching and listening to a style of presentation that attempted a realism in an unrealistic way, that tried to convince unconvincingly, that presented big names as a big attraction. It still seems the same, it still gives me a drive to try and attempt something else, something other than this bigness.

The positives that grew out of this negativity soon outweighed the negatives, and so without a plan of action, or idea of what it was that Reckless Sleepers was supposed to really be doing, projects started to be made.

The projects aren't written in a traditional sense of the word. They are constructed layers and pasted sets of fragments that have been worked out in front of a computer screen, in a black box, on a train journey home, in the middle of the night. They contain a set of rules, a social order, a structure, a chaos in a very ordered way and after some time and some experiments and lots of failures, a project begins to take a shape and form, an identity of its own.

I still don't know what it is that Reckless Sleepers make, I still can't quite place my finger on it so it stays still.