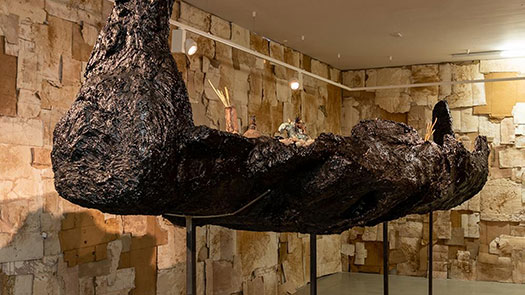 A video recording of this talk will be available from 2 June.

Benjamin Wigley is an interdisciplinary artist and filmmaker who began ARTDOCS in 2010, to produce his own first award-winning short film ‘PS Your Mystery Sender’. His work has shown widely at international film festivals, broadcasters, galleries and museums including: SXSW, DocFest, HotDocs, Docs MX, American Museum of Natural History (NYC), Somerset House, The Space, BBC, C4, SBS, Amazon Prime, COP26 and within many National Trust Landscapes. He was selected on the Scottish Doc Institute’s ‘Bridging the Gap’ Scheme at ECA, then went on to develop his first feature film, ‘Paa Joe & The Lion’ at the European lead Documentary Masterschool, which premiered at DOCFEST 2016. He studied 16mm filmmaking at No.W.here in London. Then, in 2017 was invited as Artist in Residence, across Liaison of Independent Film Toronto (L.I.F.T) & Philip Hoffman’s Film Farm in Canada. Ben has been consistently supported by Arts Council England & National Trust with major expanded cinema & visual art projects within landscapes, pushing the boundaries of film, sound & visual art, & live theatre.

He has collaborated with artists, poets, scientists, academics & musicians, including Benjamin Zephaniah, Owen Sheers, Sir Paul Smith, Wolfgang Buttress, Tania Kovats, Nathaniel Robin Mann, and has been mentored by world class filmmakers and producers, most recently working with Andrew Kotting on his multidisciplinary art project, Hart of the Wood. Ben’s current film ‘Of Walking On Thin Ice, (Camino to COp26)’ , is about the 500 mile walk from London to Glasgow for COP. It recently had its World Premiere at Encounters Film Festival, after the film was walked 135 miles from London to Bristol within the ‘Film Staff’, The short film premiered as part of the Culture COP27, in Egypt.