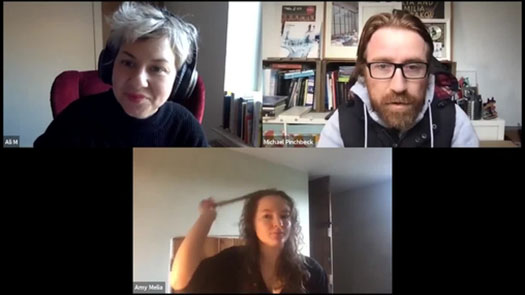 Ali Matthews is an American artist based in Manchester, working across performance, music and video. Over the past two years, she has been most interested in intersections between song, scenography, video and live performance. Recurring themes in her work include eerie and uncanny feminist interventions in established mythic narratives, and working with the voice as a transformative vessel for incantation. She is increasingly interested in sustainability, ecology, and new technologies. For The Ballad of Isosceles at SLAP festival (York), the Guardian called her "a bewitching performer whose songs cling and haunt". In 2019, she was a M.I.F. Creative Lab artist, and created a "play for video" Bobby, (Lunch is Darkness) that was released on the festival's website and BBC livestream. In 2020, a week before lockdown, she showed her VR/360 film adaptation of her show The Ballad of Isosceles alongside the live performance work at New Adelphi Theatre in Salford. Her concept album The Witching Way is out on Spotify and Bandcamp. Ali is Lecturer in Theatre and Performance at University of Salford.