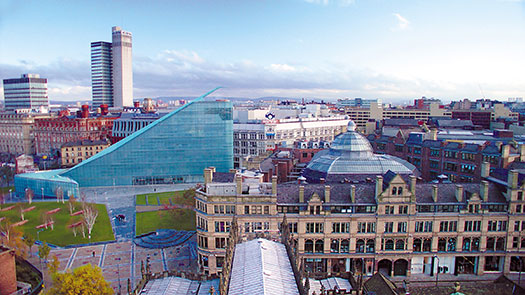 Mapping the Place Identity of Manchester

In a rapidly changing world, how does an industrialised and urbanised city such as Manchester contribute, resist or mediate the changes that are caused by globalising forces, or, how the city in turn, is coming to be changed itself? What are the strategic roles of heritage, design, art and culture in shaping Manchester’s identity and placemaking?

As the 20th anniversary of the 1996 Manchester bombing approaches, Landscapes Of Identity Symposium - a trailblazer event for Manchester Histories Festival 2016, will feature inspiring talks, discussions and debate that centre on the theme: mapping the place identity of Manchester. Some of the key contributors to the Millennium Quarter – a project designed to transform the city centre after it was rocked by the catastrophic event on Saturday 15 June 1996 – will be evaluating the timely topic of rapid ‘change’, in Manchester’s urban morphology since the last two decades.

Chaired by writer, broadcaster and curator, PHIL GRIFFIN, other speakers on the day will also include JIM CHAPMAN – Chartered Architect, visiting Professor at the Manchester School of Architecture, RIBA Client Advisor and Trustee of the National Museum Liverpool; LUKE BAINBRIDGE – Writer, Music Journalist, DJ and Head of Arts and Culture for Festival No.6; SIMONE RIDYARD – Architect, Artist and Founder of Manchester Urban Sketchers; JOHN HYATT – Artist, Musician, Professor of Fine Art and Director of MIRIAD, Manchester Metropolitan University; ROGER MILBURN – Chartered Engineer, Senior Executive for Arup, visiting Professor to the University of Manchester and a member of the General Assembly; and CHARLES LAUDER – Television Producer and Director, Journalist, Chair and Trustee of Contact.

Subjects of talks, discussions and debate will include—

Manchester Histories Festival 3-12 June 2016. Ten-days of events celebrating the familiar and revealing the new and hidden histories and heritage from across Greater Manchester. Whether people would describe themselves as histories fans or not, MHF2016 will have something for everyone.
www.manchesterhistories.co.uk