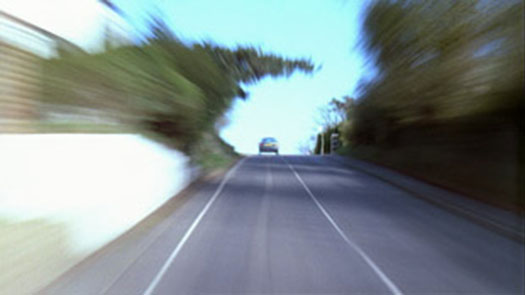 These three films relate back to Raban's engagement with Expanded Cinema and his direct 'landscape' pieces, yet also incorporate the documentary aspect of later works. They all suggest the transient aspect of the environment and expose the layers of meaning attached to objects.

Raban often concentrates on the actual process of assembling and then presenting film through the manipulation of the time and mechanics of the projector. Kamera Kinetics reflects this aspect by utilising the short throw distance of the projection. This form of display removes the social implication of the arena created by the distance between the projector and the screen, instead revealing the machinations of the illusory virtual image.

There is a political strain running through all three pieces. In Sundial bankrupt Canary Wharf is effectively demoted to an alternative Big Ben, while Civil Disobedience includes a score composed by David Cunningham that features elements of Margaret Thatcher's speech regarding the contentious sinking of the Belgrano in the Falklands War as a type of mantra enhanced by the looping of the film. These three pieces feature time-lapse, rhythmic editing and a punctuated visual structure and were specifically programmed by the artist for Pavement gallery to create further layers of meaning through their composition and theme.