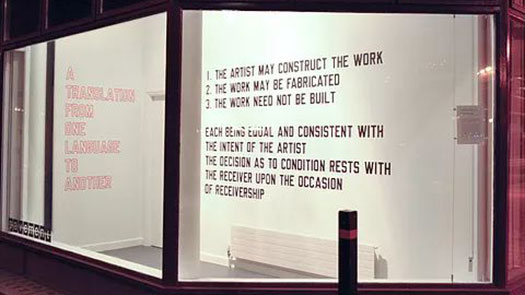 Pavement is pleased to announce an exhibition of two seminal works by Lawrence Weiner, which will be open to the public from 30th September to 12th December 2010. The Gallery is viewed externally; the work can be seen 24 hours a day 7 days a week.

Since the mid-1960s, Weiner has used text as his primary material, he considers written language to be a sculptural material and his text pieces distill the weight and sensuality of physical materials into the ephemeral mass of language. His sculptures utilise the familiar structure of sentences thus opening up the work to a wider audience.

In both works shown at Pavement, Weiner enters into a dialogue with the reader on the various processes of communication. 'DECLARATION OF INTENT' (1969) is still a vital call-to-arms for arts practitioners to question their relationship to materials and the function of physical outcomes. The university campus location will flag the works existence to a new student audience and also serve as a refresher for those familiar with its rhetoric. Within the specifics of the space, the presentation of 'A TRANSLATION FROM ONE LANGUAGE TO ANOTHER' (1969) could resonate with the proximity of ethnically diverse communities, with the academic language of the two universities and even with passing commuters on their way to work. Weiner explained that the piece alludes to all artistic actions as 'thats basically what all artists do: translate something into something.'* In this sense, language is not confined to a verbal act but also to physical actions, communicating an intended or potential action and therefore could also encompass the process of a viewer reading and responding to the text.

* The artist in conversation with Charles Stankievech, KIAC School of Visual Arts, April 2010

Lawrence Weiner is an internationally renowned artist who has created a significant body of work over the last 40 years. His public projects, often texts appearing as part of the urban landscape, have defied many of the preconceptions of "public art" and monumentality. Weiner's well-known text works exist as gallery artworks as well as in film, video, CDs and many artist's books. Major museum exhibitions include: Dia Center for the Arts, New York, Galerie Nationale du Jeu de Paume, Paris, Stedelijk Museum, Amsterdam, and most recently at the Deutsche Guggenheim, Berlin.