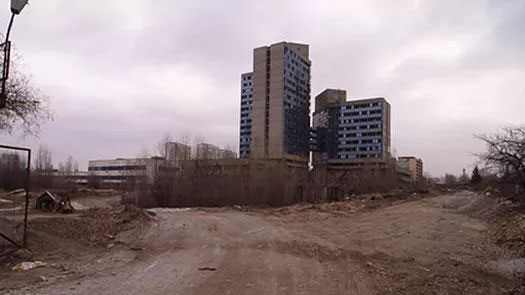 Ever Growing Never Old, Looped (2010) is a new work by Toby Paterson. Shown for the first time at Pavement, the work marks a temporary departure in form for the artist. More familiar as the maker of paintings, sculpture, reliefs and wall works – the new piece uses film and photography as its medium. Ever Growing Never Old, Looped, is a film made from still images which originate from a series of research trips made in Central and Eastern Europe between the Spring of 2006 and the Autumn of 2008. A creative notion of structure and construction is often at the base of Paterson's work, there is also a clear fascination with modernist architecture and the innumerable forms and variations it takes. As the urban landscape can be transformed by the vision of the artist into an ideal form, this process can also make the viewer more aware of the more 'real' state of their surrounding city space. With Ever Growing Never Old, Looped, there is something a little different at work. Presented with an unfolding series of images, there is a sense of the familiar (the fact that architectural forms repeat themselves), but then there is also the way in which certain buildings or spaces catch us short (unfamilar or awkward forms suddenly intervening to break more comfortable readings). The images in the film allow us to speculate on places without the context of a clear history or identity – it is a realisation of this state which is perhaps crucial in helping to re-think our responses to the urban space which surrounds us.

Toby Paterson lives and works in Glasgow. After graduating from Glasgow School of Art in 1995 he has exhibited extensively, including: Tate, St Ives; Fruitmarket, Edinburgh; Gallery of Modern Art, Glasgow; Museum of Contemporary Art, Belgrade. Paterson was the winner of the Becks futures art prize in 2002, he has been commissioned for a number of major public art pieces, notably Poised Array for the BBC Scotland Headquarters and is the lead artist on the extension of the Docklands Light Railway for the London Olympics in 2012.