Manchester School of Art / Pavement Gallery / Johanna Billing: Where She Is At (2001) 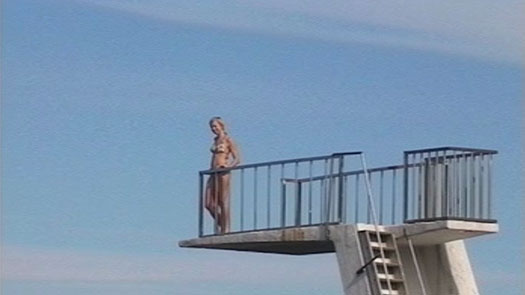 Pavement Gallery presents Where She Is At (2001), a film by Johanna Billing in an exhibition opening in August 2021. The looped narrative of Where She Is At follows a woman hesitating over the act of jumping from a high diving platform at a functionalist seaside leisure centre in Ingierstrand, Norway. Built in 1931, the centre was originally developed to promote health and wellbeing among the local population, but by the time the film was shot in 2001 it was up for demolition. Partly staged with actors, the work blurs the line between documentary and fiction. Billing’s subtle camera work oscillates between showing the woman’s turmoil at the top of the diving platform and the indifference of the onlookers below. The feeling of uncertainty displayed by the woman replicates the collective concern felt by the local population for the fate of the open-air baths – an anxiety that is enhanced further by the looping of the film.

In Where She Is At Billing blends the differences between private and public spheres. The work invites us to reflect on the protagonist’s inner thoughts and mirrors our passive spectatorship with the minimal reactions of seaside onlookers. The suspended window setting between the inside and the outside of the gallery prompts further reflection on the voyeuristic act of observing the protagonist. It invites us to question the boundaries between the private and the public, action and inaction. The protagonist’s performance builds tension, eventually rewarding us with a moment of relief once the uncertainty resolves