This work began as a limited edition vinyl cut (drawing) to be included in Cluster Arts magazine (December 2008) - the object existed as a rectangle of matt black vinyl (dimensions) with a fine cut delineating a labyrinthine line.

The possibility is proposed of the recipient of the work extracting the flat 2-dimensional cut line from its vinyl ground. Due to the complexity of the cut line, the choice to engage in this activity would likely result in a tangled 3-D vinyl formation.

Over time the material properties of the vinyl cause shrinkage to occur. The hitherto barely perceptible cut in the vinyl rectangle became more evident as slivers of the white backing paper were revealed.

Having observed this change in the materiality, the decision was made to arrest the process of change by mounting the vinyl rectangle on an aluminium substrate. This work, exhibited as a pair of drawings was shown in the context of a show titled Free Association at Area53 in Vienna.

Nightingale (version 3) moved the work away from a theoretical proposition to an event through the performative unpicking of the piece by Matthew Lee Knowles. [Note: a second work was shown in this exhibition and Matthew Lee Knowles, an artist/composer was invited to respond to my work.]

Finally, version 4, shown as part of Power of Copying looks at the mechanical sameness of a series of the vinyls. During the period of the exhibition one vinyl could be unpicked each day by an audience member to reveal the difference in the 3-dimensional line. 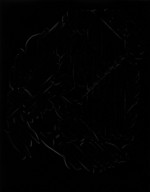