The pairings project was initiated at Manchester School of Art by Alice Kettle & Alex Mckerlain. In terms of research it seeks to question and interrogate how collaboration can inform individual and collective practice. Dissemination is by exhibition and publication. Associated conference and symposia facilitate further discourse and broaden response and impact within the craft and textile field.

Invited to participate as a new pairing in 2011 and commissioned to produce work for Stroud International Textiles.
The collaboration was with Jerwood prize-winner and textile artist Shelly Goldsmith we explored commonalities and differences in practice, in terms of craftsmanship, narrative and material responses.

To reinforce the theme of pairings we chose to work with gloves. Although the smallest of garments the complex construction of gloves facilitates endless variety. They are intimate yet can be an outward cultural signifier of their wearers.
Interventions were made to a series of single found or re-claimed gloves with the aim of identifying or making visible the perceived individuals who once wore them.

In previous research I have explored how legends persist of drowned fishermen, identified by the patterns on their Ganseys. Goldsmith has responded to how the Forensic Science Service develop narrative in clothes and construct the character of the wearer.

We developed ideas and responses relating to faux forensics, urban narratives, emotional connection and genetic evidence.
Through a series of processes, including stitch, print and deconstruction clues are presented to suggest simple portraits or character profiles.

Some of the gloves present this matter in subtle form, others are more obvious but ultimately plenty of space is given for an audience to bring their own interpretations. 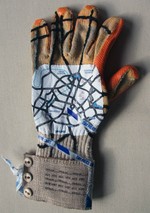 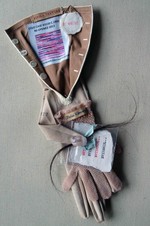 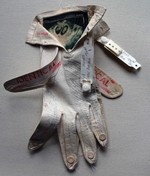