South Korea: Winter Olympics in PyeongChang 2018
As part of the Winter Olympics Joe was invited as one of 20 international designers to design a poster in celebration of the forthcoming Winter Olympics to be held in South Korea. The design work was shown alongside 20 international designers and 20 designers from South Korea. The exhibition supports the development of art and culture in the four areas of the games and to make the 2018 PyeongChang Winter Olympics a successful cross cultural Olympics. Joe was given the place of Yeongwol to respond to. Yeongwol is known for its Ginko trees, historically, they were brought into the country together with Confucianism and Buddhism when they were introduced from China.

The work was exhibited over August to October in a travelling design exhibition at the four cities of the games. The four cities being, Taebaek, Yeongwol, Pyeongchang, and Jeongseon.

The work was sponsored and funded by the Korean Cultural & Arts Centers Association. 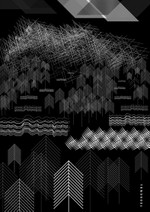