Radiabolus's research imperative focused on surveying and analyzing how military organisations co-opt music to seduce younger generations into enlisting and thus possibly entering into conflict-based situations. The investigation's exemplary cross-disciplinary methodology identified and made publicly accessible this mode of cultural assimilation whereby music serves martial functionality. The research question underpinning the project asked what are the increasingly abstract ways in which music is being weaponized by policing and military organisations.

The research's analytical precision and significance resides in its capacity to enhance knowledge and debate around the emerging research field of violence and music and more particularly in revealing compelling evidence of new relationships between them. It responds to and expands on wider cultural debates around waveformed conflict opened up by theorists such as Paul Virilio, and artworks such as Nik Nowak's 2011 work Panzer and Suzanne Treister's Hexen 2.0. A rigorous investigation was undertaken by contacting the 26 military organisation's public relations' departments to access information and sound/film media pertaining to the history of their advertising and subsequently compiling an archive of the soundtracks of 200 TV adverts.

Radiabolus's interactive system rendered it a pioneering robotic artwork as meticulous experimental testing was carried out for it to simultaneously control: a data base and audience's interaction with it; a hypersonic speaker's movements; 5 bespoke sound-systems. The convergence of advanced technological processes and diligent historical inquiry in this groundbreaking future-media artwork has influenced musicians, writers, artists and practice-based researchers interested in the interrogation of sonic warfare such as Anke Eckardt's (Academy of the Arts Cologne) sound installation Phantom Lines. Radiabolus's technological solutions had to be original and groundbreaking as no off-the-shelf technology existed. The rigor and accuracy of the robotics research was ensured by our development of all aspects of the system down to the etching of the artwork's circuit boards. 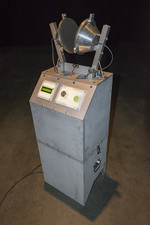 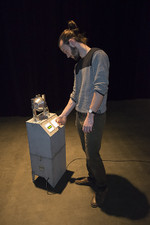 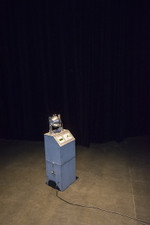