Fugazi, for the first time, brings together the artists Jasleen Kaur and Andrew Lacon who both explore personal biographical responses to objects both natural / 'real' and not...

Kaur's work is an ongoing exploration into the malleability of culture and the layering of social histories within materials and objects. Refashioned objects are often based on instinct and resourcefulness, reflecting a hybridity of national custom and reconsidering the realities of materiality, usage and everyday routine. For this exhibition Kaur presents; 'Cairns 2016.' a series of three sculptures influenced by the actions of her father, who for 30 days ritualistically prepared a joth (ghee candle) and placed it on a derelict plot of land by their house within a shelter of bricks and tiles. Jasleen's family were advised by a Sikh saint to light the joth at sundown for thirty days to ward off negative energies. This project is explicitly personal to Kaur, and explores the disparity between Indian and Western rationale through an object that expresses a confluence between two cultural ideas, values and aesthetics.

Lacon's work also addresses materiality drawing on its historical and socio- political uses. Lacon embraces his earliest experiences of art from his formative years living in Dudley in the West Midlands. Here, he visited municipal museums, local galleries and churches, contemporary art was experienced almost explicitly through images. This second-hand and delayed encounter with new art and art outside of his locale led to an idea; art is encountered through photographs, 'staged' photographs and there is a failure to address the distinction between display and experience. Lacon proposes we take for granted photographic representation of sculptural objects and this effects how we value materials and their attributes both functionally and conceptually. Lacon, by reclaiming and readdressing objects in relation to their display, asks us to consider how historical importance and social class has shaped our experience of art and culture. Lacon will be exhibiting a series of new works influenced by a residency undertaken in Mexico, supported by the British Council and Grand Union in Birmingham. 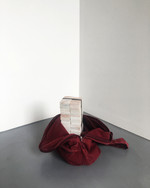