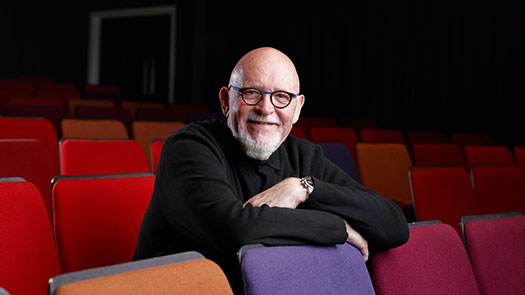 A video recording of this talk will be available from 6 January.

Dave Moutrey is Director and Chief Executive of HOME a purpose built 7,500m2 multi art form venue that opened in May 2015. In this role he conceived and led both the merger of Cornerhouse and Library Theatre Company and the £25m capital project to create HOME which has attracted almost 1m visits per year since it opened.

HOME includes 5 cinema screens, education spaces, digital production and broadcast facilities, a 500 seat theatre, 150 seat flexible theatre, 500m2 gallery space, café bar, restaurant, offices and other ancillary spaces consistent with a production centre. It is a ‘making place’, providing new opportunities for artists and audiences to create work in a different way together, as well as a social and cultural hub. Dave has overall artistic control of the programme and executive produces major film, theatre and exhibition projects working closely with this team of Artistic Directors.

In April 2018 Dave was seconded to Manchester City Council in a part time role of Director of Culture. He is responsible for advising the Council on policy and strategy for culture and working closely with the Cultural Leaders Group on joint working and other collaborative initiatives.

Dave has worked in Manchester in leadership roles in the arts since 1984 previously at Abraham Moss Centre Theatre, Arts About Manchester and Cornerhouse. He was awarded a Doctor of Arts honoris causa by the University of Salford is a Fellow of the RSA, a member of the Chartered Management Institute, and the British Academy of Film and Television Arts. Dave is also an advisor to the British Council and holds a number of nonexecutive roles on not-for-profit boards.