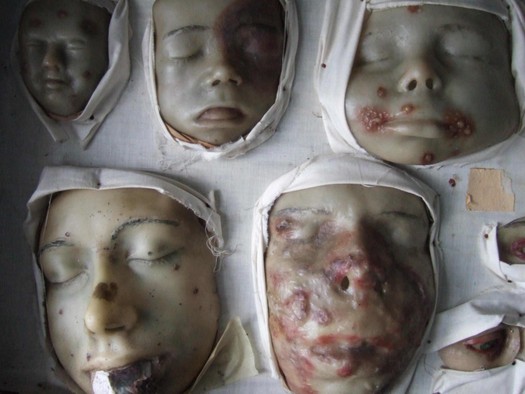 Not Jake and Dinos Chapman

I grew up in the beautiful seaside resort of Morecambe. When I was a small boy, I used to visit the waxworks on the promenade. There were creepy versions of Henry VIII, Florence Nightingale and Neil Armstrong, but the real draw for kids of my age, was the dark room with frosted glass that housed an Edwardian collection of wax effigies designed to put you of sins of the flesh for life. You were supposed to be 16 or over to get in, but whenever the attendants werent looking, we'd steal in and gawp in horror at cross-sections of full-term pregnancies and the ravaged life masks of faces eaten away by syphilis. Anyway, some years later, I read that the waxworks had been closed down and some sort of laser zone had opened up and I wondered what had happened to Henry and his 8 wives, so I paid a visit. To my surprise the entrepreneur who'd opened up the laser zone, had bought all the waxworks, lock, stock and barrel. He said he had some left, if I wanted to visit his lock-up; I could buy some off him! Well, this hadn't been my plan, but the offer was too tempting to say the least, so I jumped in this strangers car and paid a visit to his treasure store. On the way, he confided that he'd actually sold off most of the costumes to a fancy dress company and only had 'odds-and-sods' left.

When we got there it was like a massacre at the Chapman brothers studio. In this unlit room, there were limbs sticking out of bin bags everywhere. I gave them a cursory once-over, so as not to appear rude, but it was obvious that the cream of the crop had been pillaged already. Crippens head with its glassy, dead eyes had some appeal, as did something rubbery that had apparently been a creature from Doctor Who; but on the whole it wasn't that impressive.

As we were leaving, my host paused for a moment and gave me an apprehensive look. After some, awkward stuttering, he told me he had a few other bits in another room, but they were a bit gruesome and he didn't think I'd be interested. I was. He lead me through the dark into a room stacked high of wax internal organs, dissected foetuses and mutilated genitals. I bought the lot.

It was a bit of a whim actually and when I got home, my partner was horrified, saying, they'd never be allowed in the house. Well I got them in the loft and that's where they stayed for years. Discovering the benefits of eBay, I quickly profited from this purchase, but now feel immense sadness that I broke this collection up. So, I'm left with one case of sad, ravaged faces; and of course, they're still not welcomed at home, but working at Arts for Health gives me an excuse to have them up in the office; sensational or ugly, I'm not sure, but fascinating and beautifully crafted from life, they are.