To Hell with Culture? Re-examining the commodification of culture in contemporary capitalism, 30th October 2014.

Over 70 years ago, the anarcho-syndicalist art critic - Herbert Read - wrote To Hell with Culture (1941). This was an essay that sought to criticise the capitalist co-optation of culture, whilst simultaneously calling for a functional art within a democratic society. While Read understood function in terms of a natural beauty, an understanding perhaps based on his anarchist ideas coupled with a modernist conception of the artist, his essay provides a useful starting point for thinking about the commodification of art today, drawing upon Marxist, communist and anarchist ideas.
Seventy years later, Reads warning about the commodification of culture under capitalism is almost prophetic. The neoliberal period has now adopted and embraced the figure of the (modernist) artist, and culture more widely, evident in recent support for research on cultural value and the increasingly fractious corporate sponsorship of the arts in Britain. This one-day event coincides with the screening of director Huw Wahls film on Read also titled To Hell with Culture (2014). The symposium intends to initiate a critical conversation around the commodification of culture, updating Reads ideas and taking the discussion beyond his 1941 essay and into present critical thought. In short, we ask what can critically engaged artists, activists and theorists learn through returning to Reads essay? Questions might include (but are not limited to): What role does art/culture/visual culture play under capitalism today? What is being done to critique it? Is it possible to make functional art counter to capitalism?
Suggested topics may also include:
- The commodification of art/culture
- Anarchism and art today
- Alternative/anti-capitalist artistic practices
- Reads legacy and contemporary art making
- Art, politics and culture under neoliberalism
- What is functional art under capitalism?

To accompany the conference, there will be a special issue of Anarchist Studies (due Autumn 2015) based on these themes. 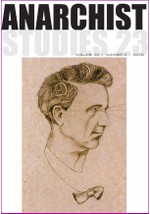