The South Yorkshire Police Service with a force of 3,000 regular policemen and women, covers an area of 6,000 square miles which includes a population of 1.3 million, 78 miles of motorway, and five football league clubs.

The photographs in this book examine five aspects of 'OPERATIONS' within the South Yorkshire Police. Using a fusion of photograpohic style, the work indicates an interaction between the interpretation and the contexts of the photograpic image in our culture. Similar concerns can be found in the parallel texts which take the reader through (among other things), the history of photography, the production of integrated circuitry, the interminable internal dialogues of Franz Kafka, the alienation effect in Monet's paintings and the Engish Civll War.

The images and text presnt the reader with a novel interface between the work of the police, the work of artists and works of art. 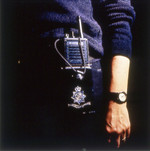