10 short films woven together which explore elements of the city. The films were projected on a giant screen above the stage, and music performed live with members of the Hallé Orchestra at the Bridgewater Hall, Manchester. 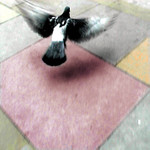