A group exhibition, curated by Dixon for the Bluecoat Display Centre, Liverpool, in the year of the Bicentenary of the passing of the parliamentary bill to abolish the slave trade in the UK. Selected artists were asked to respond to the issues surrounding contemporary slavery in all its forms, both local and global, from the commercial exploitation of child labour and migrant workers in the black economy to the trafficking of sex 'workers'into Western Europe.
Dixon's own works in the exhibition referenced the historical associations between western civilisation and slavery; classical head-forms alluded to the acceptance and economic importance of slavery within early Greek and Roman societies. A short video documented the stages in the manufacture of the head-pieces.

Selected works from the exhibition weresubsequently shown at Gallery Oldham (March 2008) as part of the 'Revealing Histories' programme.

The exhibition is documented by a digital catalogue, and archived in 'Remembering Slavery' a digital archive of Bicentenary commemorative projects at the Wilberforce Institute for the Study of Slavery (WISE) University of Hull, as part of the AHRC project 'The Antislavery Usable Past'. 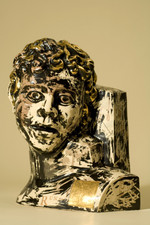