Monopoly continues Dixons exploration of ceramics as a vehicle for contemporary political narrative, and expands the scope of this enquiry into large-scale public space. Monopoly is located in a tradition of sculptural and conceptual manipulation of industrial readymade ceramics, pioneered by Marcel Duchamp (Fountain 1917) and explored in the contemporary practice of Marek Cecula (Porcelain Carpet 2002) and Clare Twomey (Monument 2009), and contributes an additional dimension of socio-political commentary to this enquiry.
Monopoly was made from 30,000 industrially produced ceramic flowers, and was installed in the courtyard of Gladstone Pottery Museum during the British Ceramics Biennial, 2009. Based on the battleship token from the board game Monopoly, the sculpture explores the irony of the games origins in The Landlords Game (developed by the American social activist Elizabeth Magie in 1904 as a tool to demonstrate the evils of land monopolism) in comparison to Monopolys contemporary celebration of capitalist economic values. The sculptures floral surface evokes a wreath-like quality, inviting a broad reading of the work as a memorial to a discredited capitalist ideology following the banking crisis of September 2008 and subsequent global economic downturn. Additionally, seen in the context of the continuing decline of the Staffordshire pottery industry, Monopoly can also be read as a memorial to the loss of the Potteries own monopoly of a global ceramic market. This industrial decline currently threatens the loss of unique and long-standing manufacturing skills and traditions, exemplified by the hand-made bone china flowers that make up Monopoly.
A complementary exhibition celebrating the craft skills of Staffordshires remaining bone china flower makers was shown in the adjacent Rosslyn Works. The Floralists, designed and curated by Dixon, documented the flower makers processes and techniques through portraiture and video footage. 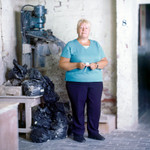 The Floralists: Jeanette (Portrait by Gavin Parry and David Penny) 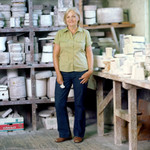 The Floralists: Maureen (Portrait by Gavin Parry and David Penny) 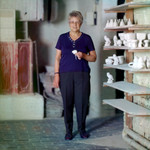 The Floralists: Sheila (Portrait by Gavin Parry and David Penny)