'Hero' a site-specific sculpture, was created for the Ahmedabad International Arts Festival 2010, in the context of the Pol Project (http://thepolproject.blogspot.com) an ongoing MIRIAD project which aims to combine the knowledge of UK and Indian craftspeople and researchers in order to engage with a communal urban space (Dahl ni Pol, a Jain community in the heart of the old city of Ahmedabad, India)
One aspect of the Pol project was to explore the 'finding' of beauty in mundane and unexpected places and contexts, and Dixon found inspiration in the ubiquitous, sturdy, battered Indian bicycles of Ahmedabad. In 'Hero', Dixon incorporated hand-made ceramic flowers (as used in the previous work 'Monopoly') as discreet interventions into the structure of the bicycle. (For example into the wheel, which resonates with the Hindu concept of time and history as cyclical, and the cakra, the spinning wheel symbol of Indian independence.)
The old bicycle was sourced from the local cycle workshop of Lala Bhai, and was returned there (for re-cycling) after its exhibition in the Festival. The floral wheel and saddle remain on display in the workshop. 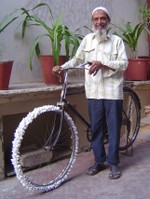 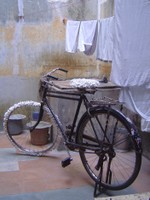