Resonate was the experimental centre-piece of a multi-media installation at the British Ceramics Biennial 2015, bringing together clay, ceramics, sound and public participation, to commemorate the contribution of the soldiers of North Staffordshire in the Great War of 1914-1918.
The monumental clay head was constructed using two tons of Staffordshire Etruria Marl clay, and was loosely based on the head of the winged victory (Nike) figure from the Inter-Allied Victory Medal of 1919, designed by William McMillan R.A., and issued to all who served in the armed forces. However, the classical form and celebratory sentiment of McMillans victory medal was challenged by the industrial aesthetic of this sculptures supporting structure, which in contrast alludes to the functionalism and brutal materiality of trench warfare. The sculpture was allowed to air-dry naturally during the course of the Biennial, and by the end of the exhibition had begun to tear itself apart due to massive shrinkage around the scaffolding armature.
The installation also featured a complementary sound sculpture by Johnny Magee, which evoked and orchestrated the familiar and incidental sounds, poignant songs and popular music of the period.
Visitors to BCB 2015 were encouraged to contribute to the project by attaching white ceramic flowers to the supporting structure of the artwork, to commemorate the 5,406 members of the North Staffordshire Regiment killed in action during World War 1. They were also invited to attach their own personal tributes (in the manner of impromptu roadside shrines and personal memorials) and to contribute their unique family stories of World War 1 as part of the installation.

Resonate was exhibited on the Spode Factory site during BCB 2015 (26 September to 8 November). Funded by The British Ceramics Biennial and MIRIAD at Manchester School of Art, with materials donated by Potclays Ltd.

The sculpture was the subject of a film,'Things Just Happen Anyway' also made in collaboration with Johnny Magee, which was screened at Picturehouse Central for the Crafts Councils 'Real to Reel' crafts film festival on 4th May 2016, during London Crafts Week. 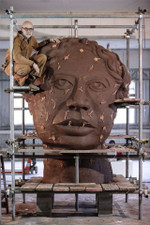