The Lost Boys: Remembering the Boy Soldiers of the First World War.

The Lost Boys project was a community engagement project examining the issue of underage soldiers in World War 1, funded by the AHRC/HLF, in conjunction with the 'Voices of War and Peace' public engagement centre.

At the outbreak of World War 1, the legal age limit for armed service overseas in the British Army was 19 years, yet by the end of the war an estimated 250,000 underage soldiers between the ages of 14 and 18 had seen active service. (Van Emden, 2012)

In the first phase, a collaborative work, 'At Heart a Man' was made by Dixon and the young volunteers from Staffordshire, who worked with a mixture of open source and archive materials at Manchester School of Art, to produce a printed ceramic installation depicting some of the tragic stories of underage soldiers in the Great War. The volunteers also produced objects based on badges and medals in MSA workshops led by Elle Simms and Jenny Walker.
The second phase of the project focused more directly on case studies of underage soldiers from the North Staffordshire regiment, drawing on research undertaken by the volunteers in the Staffordshire County Archives. In the context of Staffordshires historical connections to the ceramics industry, the young people went on to explore the commemorative potential of ceramic objects, in the form of translucent porcelain lithophanes, in collaboration with project partners The Clay Foundation in Stoke-on-Trent. 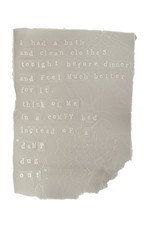 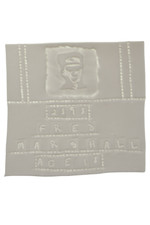 At Heart a Man (Detail of individual plate)

At Heart a Man (detail of individual plate) 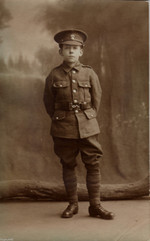 Postcard portrait of a boy soldier