Strelnikov's Glasses and Other Stories

My research investigates the representation and evolution of women through the costuming of eyewear - from spinster to librarian, from codebreaker to editor. I have created a feminist time-line of spectacle wearing female characters. My work intends to question the changing role eyewear over the century. Initially seen a prosthetic, the project brings importance of eyewear to create narrative and character representation to the public attention.

In a curatorial role, I'm interested in the dialogue creatives from both design and art might have when responding to a set brief.

Robert Hamilton's response to the project. 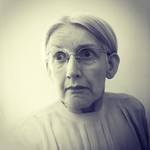