Clarissa Corfe, Curator: "For its re-launch, Castlefield Gallery is pleased to announce Babel Fiche, an exhibition of new work by artist Dave Griffiths. With the world in considerable political, economic and cultural flux and turmoil, there has been a return to interests in the socio-political in contemporary visual art and our 2012/13 exhibitions are programmed under the overarching annual theme of World In Transition referencing these issues as points of departure.

The Babel Fiche exhibition features two ambitious new works by Griffiths, Deep Field [The Photographic Universe] and the film Babel Fiche, developed from a Film and Video Umbrella commission and co-produced with Castlefield Gallery. For the past few years Griffiths' work has involved the use of 'cuedots', microdots and microfiche, exploring his fascination with technology perceived as 'redundant' after the advent of the digital era. These newly commissioned works further develop his interest in this area. Griffiths' film explores the human urge to collect, categorise and remix images through a critical questioning of the future of digital image archives. Video fragments from personal and public archives were collected and re-presented from the compressed contents as still frames printed as an edition of unique colour microfiche plates. Making sense of the excess imagery littered on the internet as well as in our personal hoards of photographic images and film footage, the project imagines how future generations may perceive the current times. In the making of the film Griffiths involved a number of collaborators, to broaden the scope of response to the archive content; applied ethics writer Stefan Skrimshire and poet Gaia Holmes as scriptwriters, musician Graham Massey producing the soundtrack, and artist and filmmaker Joe Duffy as editor.

Griffiths alters our seismic understanding of time and history. He orchestrates a disjuncture between the actual, its documentation, consequential archiving and concepts of time-shifting, treating them as malleable components to be expanded, shifted and contracted, radically reappraising the production and consumption of culture. In Griffiths' film the analogue image archive re-emerges as an object of scrutiny for a future generation of archaeologists, with a mise-en-scène of Manchester's cityscape shot at the top of the iconic Beetham Tower skyscraper." 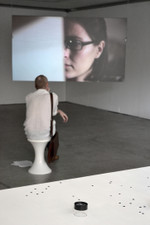