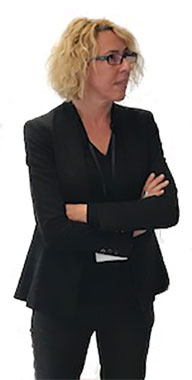 Gulsen Bal, Assc. Prof, Dr., joined Manchester School of Art as Senior Lecturer in Curating (Art Theory & Practice) in 2020. She previously held the position of Visiting Research Fellow at Manchester School of Art working in Contextual Practice, in curating with her main focus on the Department of Art & Performance, Art Theory and Practice programmes (Curating, Art History, Fine Art, BA Degree & Department of Contemporary Curating, MA/MFA Degree) between 2019 to 2020. At the same time, she was lecturer in the Faculty of Arts at ARUCAD - Arkin University of Creative Arts and Design in Cyprus from 2018 to 2020. Bal was appointed as Departmental Advisory Consultant at Istanbul Bilgi University during 2017-18, where she was Head of Department as well as holding the position of Course & Program Coordinator, NABA and Domus Academy liaison and Erasmus+ co-ordinator for the period of 2013-17. Additionally, she lectured as a Visiting Professor at Istanbul Yeditepe University for the MA degree program in Curatorial Studies between 2013 and 2017. She taught at the Vienna University of Technology (TU Wien) in the Department of Visual Culture from 2008 to 2013.

She also initiated an international residency co-operation between MA Contemporary Curating programme at Manchester School of Art and MuseumsQuartier Wien under Curators of Tomorrow program within a scope of inter and trans-disciplinary approaches in 2019.

Bal completed her undergraduate degree in time-based media art specialising in multi-media installation and video art at London Guildhall University and her MA in Critical Fine Art at Central Saint Martins College of Art & Design, where she also undertook her Doctorate studies with a compilation of a thesis titled Negation of Complicated Mirrors  An Examination of Differential Structures within the Production of Subject Realised through Creative Practice. Her research has involved exploring the temporal and strategic conjunctions of differential structures. Bal sought to understand the implications and complexity of the production of the subject exploring methods for practice-based research in fine art and in curatorial practices.

Her research addressed a number of inter-related fields of creative practice and situated them in a critical inquiry in methodologies that structure how the subject is manifested. She developed a philosophy of practice through which a mirror reflection of a world yet-to-come would become visible in art. A philosophy of practice, linking artistic works and curatorial activities was developed through a series of philosophical reflections; artworks; curatorial practices and dialogues with variety of artists and theorists.

Bal is a curator and an art and visual culture theorist and the founder and inaugural Director of Open Space, the influential art forum based in Vienna since 2007. Its primary focus is to bring different critical perspectives on art and visual culture to the surface in search of new outlines of contemporary arts by exploring new models of curatorial positions in which criticality becomes crucial. She has received several awards for the distinguished delivery of programs recognised as amongst the best accomplishments in the field of international contemporary art.

She has curated and contributed to Art Fairs and Biennials and participated in talks and conferences internationally. She has published wide range of articles in peer reviewed journals and magazines and, to date, has edited fifteen books.

Amongst others, she was selected by Londons Saatchi Gallery as one of a hundred curators from all over the world to participate in 100 CURATORS 100 DAYS for the largest exhibit of its kind on a global platform in 2012.

Open Space  Verein für ein neues Forum von Kunst und visueller Kultur aims to bring diverse creative practices together to encourage exchange and joint projects with its visual arts programme within its long established history in Vienna. The programme of Open Space intends to explore the future, generating new ideas to improve cross-border as well as critical dialogues to facilitate new kinds of creative connections that are concerned with interconnected routes within the European space in which a certain creative agenda offers new potentials in the field of contemporary art. Details…

Bal, G., Watson, Z., Sumner, A., 2020. 'How are the visual arts responding to the COVID-19 crisis?', Third Text - Critical Perspectives on Contemporary Art and Culture Magazine.